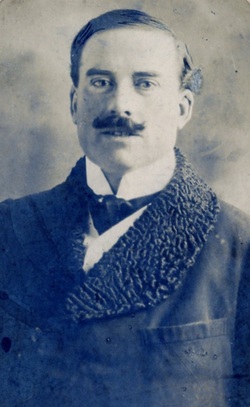 JJ Hunt
Who was J J Hunt?
Joseph James Hunt was born to Elizabeth (nee Dean) and Joseph Hunt, a farmer of some 60 acres at Devizes. In 1893 he married Ellen Katherine Bridges-Large.  This year is also the earliest reference to JJ as a photographer with notepaper header including the phrase 'Established in 1893'. In October of that year, their son Cecil Fitzherbert was born with the birth certificate indicating The Crown Inn at Bishops Cannings as the place of birth.  Further research indicates that Mrs Joseph Hunt was the licensee at the time and that she also ran the small brewery attached to the inn. Daughters Marjorie (1895) and Phyllis (1900) followed when the census shows JJ as living at New Rd., Calne.

The Hunts were butchers, farmers, and innkeepers in the area of Calne and Devizes.  They also produced ales in small breweries attached to the inns (eg The Crown at Bishops Cannings).  Was JJ Hunt inspired to follow a photographic career by the excitement and possibilities of the new age of photography led by Fox Talbot of Witshire?

The year 1904 is the first reference to JJ (now 39) of 'Ivy House Studio, Calne and Malmesbury'. He describes himself as 'Portrait and Landscape Photographer' as well as 'Photographic Artist'. It is also significant as being the year of the oldest postcard in the archive - a printed card showing 'a general view of Calne' indicating   'Hunt photo, Calne. Pub. Roynon' which was posted on December 23rd of that year. Sadly for JJ it is also the year his wife Ellen died.  She was buried at Holy Trinity Church, Calne in August of that year.  He then married Lilian Maud George in 1908; she was always referred to as Dinah by the family for some unknown reason.

The next few years see a number of printed cards photographed and published by JJ at Calne.  However, a rubber stamp with the words 'JJ Hunt - Photo Artist, Station Rd, Ludgershall' indicates that he was in this studio in December 1910. From 1912 a series of printed cards indicate 'published by JJ Hunt, Ludgershall'  follow. Soon after, in 1914, JJ's address appears on a printed photograph, of a girl with her pony and trap, as being 25a Kingsbury St., Marlborough. A few photographs followed with 'JJ Hunt, photographer, Kingsbury Street, Marlborough' printed on the reverse. It is thought that soon after this, JJ moved into No. 112 High St Marlborough (Cromwell House), premises that had been the 'Rose and Crown' until 1914. On memo paper from around this time, JJ is describing himself as 'Photographic Artist - specialities 'enlarging and copying; wedding and athletic groups; all kinds of outdoor work undertaken'.

During the 1920s many real photographs (as opposed to printed) originated from 'Hunt's Studios, Marlborough': this was usually written by hand, presumably on transparent material which would be placed in front of the negative during the printing process from an enlarger.  Subjects for postcards were varied but favourites were Marborough and its surrounding countryside. Some detailed scenes of Marlborough High Street appear on postcards as did various pictures of nearby villages.  It is known that JJ had an enthusiam for motoring and one can imagine him setting off with camera and wooden tripod in order to capture some aspect of the local environs, later to return and print the results of his efforts on to postcards which would be placed in a rack outside his studio. A much later 1930s photograph of his grandchildren outside the shop includes such a rack of postcards in the background.

In 1933, JJ's son Cecil, wife Olive, and children Audrey and Kenneth returned to Marlborough from Chicago to take up residence in the premises above Hunt's Studio. It is known that Cecil assisted his father although the extent of his involvement with the Studio is not clear.  Audrey, in a letter to her mother who was away visiting relatives, makes reference to 'daddy doing a wedding and returning by bicycle soaked' - dated 28th Februrary '35. There are certainly a number of photographs in the archive that can be attributed to Cecil Hunt.  Several years on (dates are unclear) with JJ in poorer health, a family dispute resulted in Cecil and family vacating the studio premises and leaving Marlborough for good.  JJ and Lilian retired and lived at 'The Elms' in London Road' until JJ's death in 1937.